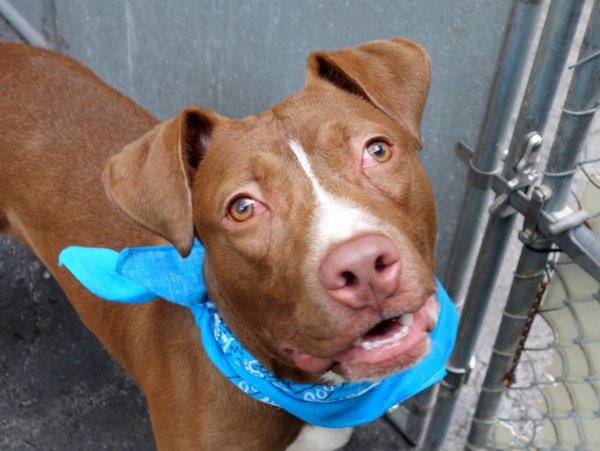 My name is ROSCOE. My Animal ID # is A1036532.
I am a neutered male chocolate and white am pit bull ter mix. The shelter thinks I am about 9 MONTHS old.

05/16/2015 PET PROFILE MEMO
Roscoe is a 9mth old neutered male APBT who was purchased off of craigslist when he was 1mth old. Roscoe is being surrendered due to the owner not having time for him. Roscoe has no known health issues and was last seen at a vet in November of 2014. Roscoe is described as friendly/outgoing to all. He greets people by jumping on them and playfully mouthing at them (does not break skin). Roscoe lived with 3 children ages 1yr, 13yrs & 16yrs he was playful, exhuberant & somewhat rough with them. The other dog in the home is an elderly German Shepherd who didn’t like Roscoe’s playful, hyper nature. He would try to engage her in play and she’ll growl and or walk away from him. Roscoe has no experience with Cats. Roscoe has never bitten/scratched an animal. During storms/fireworks Roscoe isn’t bothered. Roscoe isn’t bothered by the following: having his food/food,treats bowl touched/moved, being removed/moved off of furniture, being held/restrained, being given a bath. He believes having his toys taken away is playtime. His behaviors are unknown during the following: being disturbed while resting/sleeping, being brushed or having his nails trimmed. When someone unfamiliar knocks on the door he’ll bark but if people he knows comes over he’ll jump up on them to greet them. Roscoe is described as friendly, affectionate, playful, pushy & excitable. His activity level is described as high-very high. Their favorite things about Roscoe is how affectionate he is and he’s a good listener. His favorite activities are playing and being outside. When the owner is home Roscoe follows them around. His favorite toys are squeaky toys, kongs & bones. He enjoys games of chase & tug. Roscoe is an indoor dog who sleeps in a crate unless the owner is home then they sleep in the bed together. Roscoe eats Blue Buffalo dry food 3x a day and Blue Buffalo treats. Roscoe “goes” outside but has accidents (urination only when excited) a few times a month. Roscoe is walked at 7:30am, 2:30pm & 7:30pm otherwise he’s in his crate. He’s walked from between 30mins-1hr run in the park & he pulls on the leash very hard. Intake Behavior: During intake Roscoe had a loose wiggly body and was soliciting attention from the admissions counselors with an opened mouth and waggy tail. Roscoe responded to correction from the admissions supervisor when he became a little mouthy from excitement. Roscoe allowed to be scanned (pos.), collared & taken pictures of. He sat nicely when asked

05/21/2015 WEB MEMO
A volunteer writes: Young Roscoe lived with kids of all ages and an elderly  Shepherd. Although housetrained, crate trained, very affectionate and a “good listener”, his family decided that they had no time anymore for a puppy they owned since the tender age of one month. Indeed, youngsters (dogs and kids alike) consume a lot of our energy, take a huge chunk of our “free” time and are usually a handfull until they settle down. I must say (from experience) that dogs settle down much before children, who are a continuous work in progress. Roscoe has a lot of energy. His name suits him well. He walks and plays excitedly, almost bolts out of his kennel (he did stop and sit upon order, though!) and likes to jump as well as mouth without nipping or biting. He is a puppy, afterall, and needs to be taught ALL about right and wrong. He eliminates without marking and sits beautifully on command. He shows a lot of patience, and when I started talking to another volunteer, Roscoe just sat on the bench, observing and listening to the conversation. Roscoe likes treats that he takes gently from my hand after a perfect sit, and settles nicely with his head on my lap for caresses. He is a very sweet boy. Nine month old Roscoe is a friendly, sociable, affectionate and playful young man who needs very soon a new master and teacher who will tame his enthusiasm, his strength, his energy and mouthiness while keeping his joyful spirit. He is an adorable chocolate little nugget who was loved (he slept in his former master’s bed) and cared for, but somehow did not seem to be the perfect match anymore. I know that the perfect fit exists out there for our little Roscoe. One day, soon, he will make a new owner or family happy and proud to have him as a forever best friend.

05/18/2015 BEHAVIOR EVALUATION – EXPNOCHILD
Exam Type BEHAVIOR
Owner surrender reports Roscoe plays roughly, greeting people by jumping up on them and playfully mouthing them, but not breaking skin. During intake, Roscoe mouthed the admissions counselor, but responded to correction when he was asked to stop. He pulled hard on leash for his relief walk. Roscoe jumped on the assessor and would not position for Look item. Roscoe chewed the leash and mouthed the assessor’s hands numerous times throughout the assessment, applying a bit of pressure. During Sensitivity item, Roscoe was mouthing and exhibiting high movement. During Tag game, Roscoe played and jumped on the assessor, at the end of game Roscoe did not settle, and began mouthing assessor’s leg with a bit of pressure, needing some coaxing to stop. Roscoe allowed food bowl to be removed. He was playful with Toy, keeping a firm grip while maintaining a loose body. During rawhide, Roscoe took rawhide away with loose body. Due to his high energy and constant hard mouthing, the Behavior Team feels Roscoe would do best in an Experienced home with No Children. Roscoe’s behaviors may improve with enrichment toys such as Kongs and Nylabones to positively direct his high energy, and also obedience classes. Look: 3. Dog jumps on the Assessor, consistently rubs his shoulder on the Assessor, and will not allow Assessor to conduct the assessment. Sensitivity: 2. Dog displays high energy and movement, but it is directed toward getting closer to the Assessor. His body is soft, panting, may jump up between attempts. Tag: 1. Dog assumes play position and joins the game. Mouths assessor’s leg at end of game, some pressure. Squeeze 1: 3. Dog is soft in body and eye, and moves his legs/body so that the Assessor is unable to hold the paw Flank squeeze 1:2 2. Dog gently places his open mouth over the Assessor’s hand with a bit of pressure. Food: 1. Dog calmly allows the food to be moved, follows the dish, but does not interfere with the dish’s movement. Dog’s body is soft and loose, eyes soft, tail neutral. He lifts his head when hand is pushed against his cheek. Toy 1: 1. Dog settles close, keeps a firm grip and is loose and wiggly. He does not place his body between you and the toy. Rawhide: 2. Dog takes toy away, keeps a firm hold. His body is between you and the toy or rawhide, and he is loose and wiggly. No growling or stiffness. Dog-dog: 3. Dog approaches the helper dog by rushing in with his tail high, stiff body, head tall, and ears erect.

05/21/2015 GROUP BEHAVIOR EVALUATION
Exam Type GROUP BEHAVIOR
When off leash with other dogs Roscoe is playful and solicitous. He takes correction from the helper dog when she becomes uncomfortable with his exuberant play style.

For more information on adopting from the NYC AC&C, or to find a rescue to assist, please read the following: http://information.urgentpodr.org/adoption-info-and-list-of-rescues/

If you are local to the Tri-State, New England, and the general Northeast United States area, and you are SERIOUS about adopting or fostering one of the animals at NYC ACC, please read our MUST READ section for instructions, or email [email protected]

Our experienced volunteers will do their best to guide you through the process.

*We highly discourage everyone from trusting strangers that send them Facebook messages, offering help, for it has ended in truly tragic events.*

To view all current activity, please see our primary site. As always, thank you for supporting Urgent.

To view the current six months of activity, please see our primary site.

Get Status on any Dog